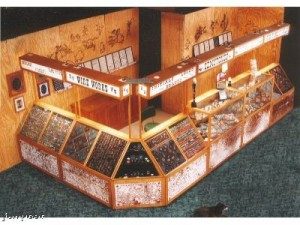 Wire wrap jewelry has recently gained popularity among all groups of people. For a small investment, any person can have a unique piece of wearable artwork created. Bold, angular designs to smooth flowing curves can change a common gemstone into an heirloom.

Ancient Phoenicians are credited with the creation of wire wrap jewelry, but the art form goes nearly 1000 years earlier. In the Biblical record, detailed instructions are given to Moses to construct the tabernacle and the priestly garments and attire. The design for the breastplate of Aaron, the High Priest is found in Exodus 28, verses 15 and on. It was to have 12 gems: sardius (ruby), topaz, carbuncle, emerald, sapphire, diamond, jacinth, agate, amethyst, beryl, onyx and jasper. All were to be set in gold filigree. Filigree was gold or silver hammered into thin sheets, then cut into thin strips and the edges filed smooth, thus making wire. The wire was woven into a basket of filigree and set into the breastplate. Later in Exodus, more detailed instructions were given about setting other gemstones into the rest of the priestly garments. Biblical scholars have placed this event near 1446 BC, nearly 1000 years ahead of the Phoenicians.
There was a change in the Egyptian sarcophagus around 1900 BC, about the time that Joseph traveled to Egypt and brought his family there to avoid the famine in Israel. The sarcophagus, prior to that time were layered with fine sheets of gold. About 1900 to 1800 BC, the sarcophagus changed to include woven strands of gold and silver, hinting that the Hebrew artists brought this art form to their new homeland. Wire was produced this way through the rise of the Phoenician Empire. Phoenician culture thrived on arts and performance. As a semi-nomadic group of people, the Phoenician people took their art forms across the known world. At the height of the Phoenician Empire from 1250 to 500 BC, their jewelry was prized through the world.

When the Greek navy came to power, the Phoenician trade started to dwindle and finally was engulfed totally by the rise of the Roman Empire. Although Roman culture was one to absorb other art and cultural ideas into their own, the wire wrap art was abandoned for more traditional silversmith techniques.

The earliest reference to drawn wire was in the 8th century of France and the first commercial wire operation was in 1270 AD in France. During the Medieval period, Knights brought wire back to England to make chains and mail for their armor. Gold and silver wire were drawn in France and transported back to England. The earliest mention of wire production in England was 1465. Wire wrapping was limited to fastening crucifix and other religious symbols to lanyards and chains. During the late 1800′s the Bohemian culture used wire to string chips of polished glass and stone beads to make necklaces and bracelets. This was popular among the European aristocracy for nearly 50 years. These hand-forged chains were so popular that if you were found out to not have an authentic Bohemian piece of jewelry, you were shunned and scorned.

From 1837 to 1901, the Victorian Age had emerged. Among the most popular pieces of jewelry was the cameo. Wire art combined the two most popular forms of jewelry of the time: sculpture and cameo. Wire artists created jewelry that has been handed down from generation to generation. The truest form of Wire Art Sculpture has only recently been seen. Many artists have introduced this art form into almost every culture of America. Hundreds of artists now create all forms of wearable art such as rings, pendants, hair barrettes, broaches, bracelets, and stick pins.
Modern wire artists combine gemstones, beads, antiques, family heirlooms and even mineral specimens with gold, silver, gold fill wire. Other artists also use copper, jewelers brass and German silver in some of their designs.

Get Social with Us